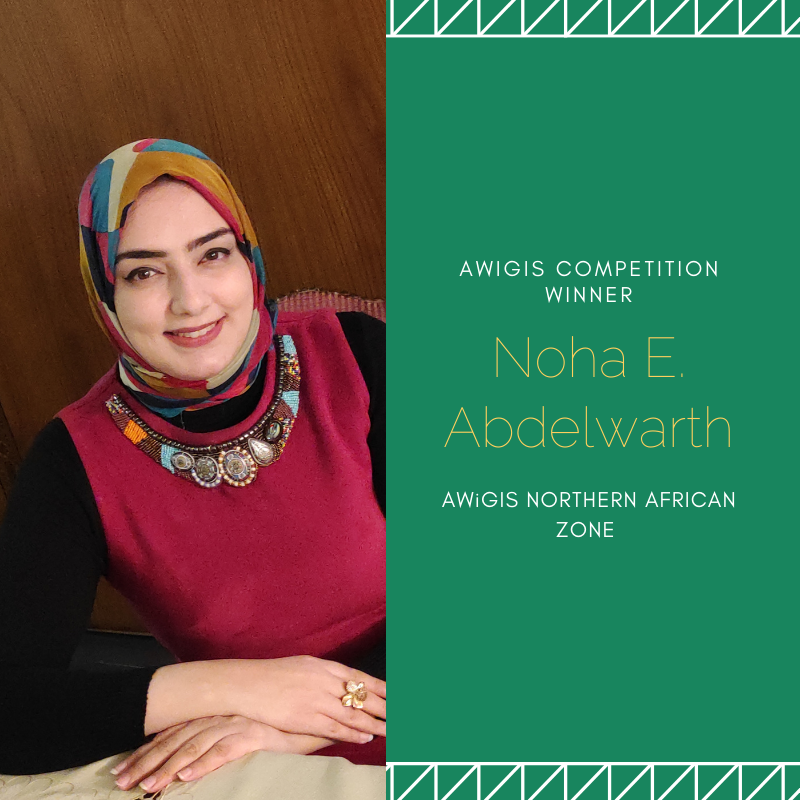 The Role of GIS as a Management Tool to Stop

the Epicenter of the Urban Sprawl Disaster

Urban sprawl is considered as a danger that grows to the point of disaster, especially when it  comes to unjust encroachment on agricultural lands, which is a crime against peoples and their  food security. In recent decades, urban growth has not been adopted with the needs of the  population and as a result of this process; many farmland has been used for construction.

It is a  great loss that appeared recently with the global Coronavirus (COVID-19) pandemic, the closure  of borders and the need for countries to be self-reliant. After studying the role of GIS in  monitoring reality during 30 years and predicting the sprawl in the next years, the most  important results showed that this technique is an effective tool that must be recommended to  be adopted to confront random urban sprawl to stop disasters arising from this event.

Urban sprawl can be considered a silent cancer that grows through the ages and is against the  law. The randomness of the continuous construction throughout the ages makes the building  lack of safety and construction factors. The slum area lacks of planning to provide with the  necessary facilities and urgent relief services in case of danger. Cancerous urban sprawl also  leads to a demographic problem that is the focus of other social disasters as a result of poor  planning to create a random population society that is lack of all the features of health, morals  and education.

Therefore, the necessity now appears in front of governments after the  aggravation of the disaster in the impossibility of an ideal re-planning of all cases on the ground  which resulted by a long period of randomized urban sprawl. Therefore, it is the important to  resorting to geographic information systems (GIS) to play an effective role in trying to stop the  cancerous expansion of highly urbanization, taking advantage of the difficulty of spatial control  in the distant ends of the Earth.

The 2009 Global Assessment Report on Disaster Risk Reduction (GAR) discusses in detail the  process of urban sprawl and increased risk of disasters. (UNFPA, UNISDR 2012) These negative impacts can be summarized as:

1. Flood and flash flood disasters risk: Unplanned urban area is suffered from lack of required  infrastructure and services like potable water supply, electricity, gas, drainage systems and  many other services. Lake of drainage systems exposes these areas to hazards.

2. Climate change disaster risk: Urbanization resulted in near-surface temperature increases of  more than 1ͦK over the urban sites during both winter and summer. (Lamptey, Barron, and  Pollard 2005)

3. Pollution disaster risk: urban sprawl has many negative consequences for residents and the  environment, such as higher water and air pollution. Environmental degradation in rapidly  urbanizing regions has negative impact on human and ecosystem health. (Duh et al. 2008) 4. Loss of farmland that secures food requirements: that loss appeared recently with the global  Coronavirus (COVID-19) pandemic, the closure of borders and the need for countries to become  self-reliant. 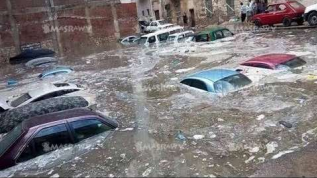 1. Detecting the urban sprawl over 30 years.

2. The absence of a desert expansion land.

3. The low price of agricultural land compared to the urban area.

4. Low income of the population.

6. Lack of planning that does not adequate to realistic requirements.

All the following steps were accomplished using ArcGIS Pro 2.6.

1. The Urban sprawl detection over 30 years:

To detect land use/cover change (LULC) over 30 years, 20 Landsat 5 and 8 images are collected  from 1990 to 2020 for each year. The roads were masked form the images then images were classified using maximum likelihood supervised classification tool to agricultural lands, urban,  and water. Then the urban sprawl was estimated.

Future urban sprawl was predicted for year 2030 by the following steps:

1. The Urban sprawl detection over 30 years 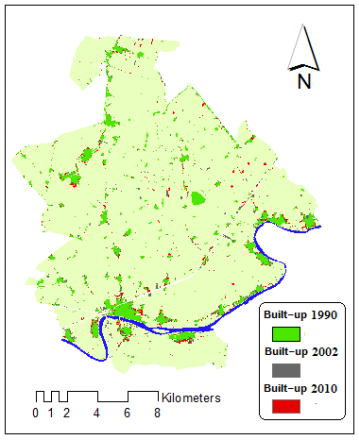 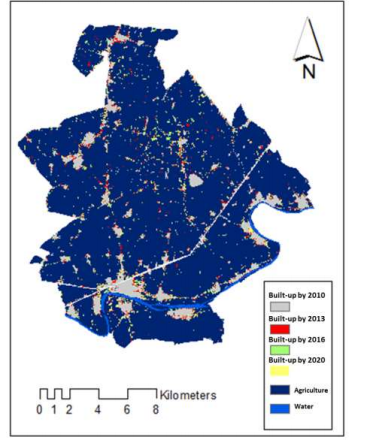 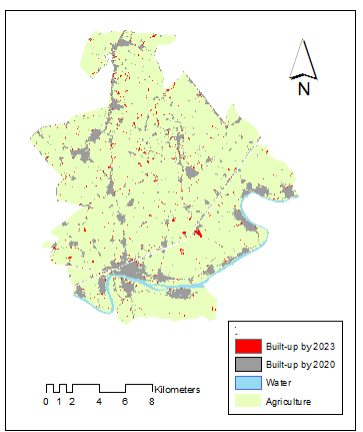 The results show that the urban sprawl at the next year will continue to be excessive, rapid and  random in agricultural fields. If we deal with the sprawl on agricultural land, then we must stop  and sound an alarm to confront the disaster that has been achieved in the simplest description,  as the risk doubles in the form of crimes against the food security of peoples. But if we look at  the multiplicity of risks due to the unfair and unjust urban sprawl, we have to pay attention to the need for permanent planning, and urban expansion with stability and rapid population  growth. (Habibi, S, and Asadi 2011) proposed some policies to control urban sprawl and to  decrease its negative effects. There are many policies that each one concentrates on a different  aspect of this issue.

• Create urban boundaries: Urban boundaries in edges of cities will control urban sprawl. In this  regard, only constructing in inner districts will be allowed and urban size will not be extended. • Participate in providing infrastructure costs: Surveys show that urban sprawl has got costs 20  times more than the normal growth because of needs to news ways, schools, housing and  public services. So, increasing resident’s share of costs plays an important role in controlling  sprawl.

• Betterment of low-income household’s living conditions: One important part of residents in  suburb is people who migrate for improvement of their family life. Paying financial credits,  preparation of Affordable housing and regional subsidies are some solutions for improving their  living condition.

• Redevelopment of inner-core regions: This action causes an increase in urban land price.  Usage of lands and enterprising in industrial abandoned lands, blank commercial plots and  metro stations spaces, Rehabilitation of abandoned properties and historic buildings are some  examples of this policy.

• Control growth and protection of lands: Open spaces have high value tax determination for  changing Land uses causes a decrease in the rate of land changes.

• Support smart growth strategies: Smart growth concentrate on compact development and  redevelopment built up area in a city. Creative and efficient management: presenting creative  urban policies will cause an appropriate growth. So, planners should be able to determine value  and direction of development and its costs.

In this study, Geographic Information Systems (GIS) was used to detect the urban sprawl on  agricultural lands, to study whether it could play an effective role in addressing the focus of the  disaster represented by the random spread of cancerous urbanization, and its consequences.  The observation images over 30 years have shown that the disaster severity curve is reached in  creep over lost farmland areas from year to year. 1045 ha of fertile agricultural lands were lost  by urban sprawl during the period of 2010 to 2020, and the prediction analysis found that the  continuous cancer of urban sprawl will occupy 370 ha by 2023.

The results confirm the urgent need for governments to GIS to develop policies for implementing appropriate solutions to  control urban sprawl according to the characteristics of regions and cities. In conclusion, the  study ends with a recommendation for further research into all aspects of the disaster arising  from the spread of urban sprawl cancer that was not covered by this study, with a focus on  adopting geographic information systems technology in this regard.

Lamptey, B L, E J Barron, and D Pollard. 2005. “Impacts of Agriculture and Urbanization on the  Climate of the Northeastern United States.” Global and Planetary Change 49: 203–21.

More From Our Blog 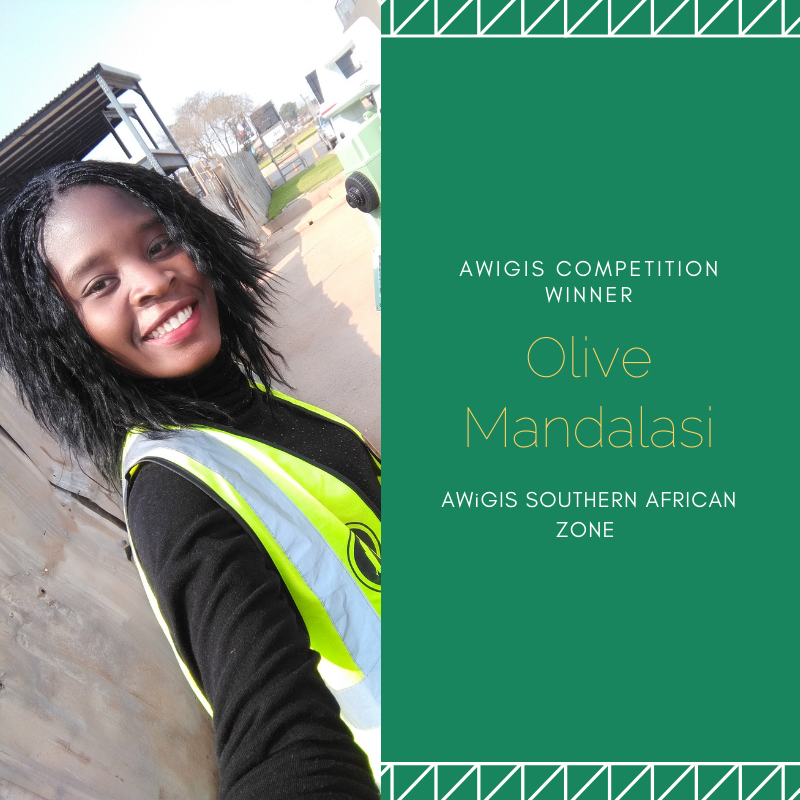 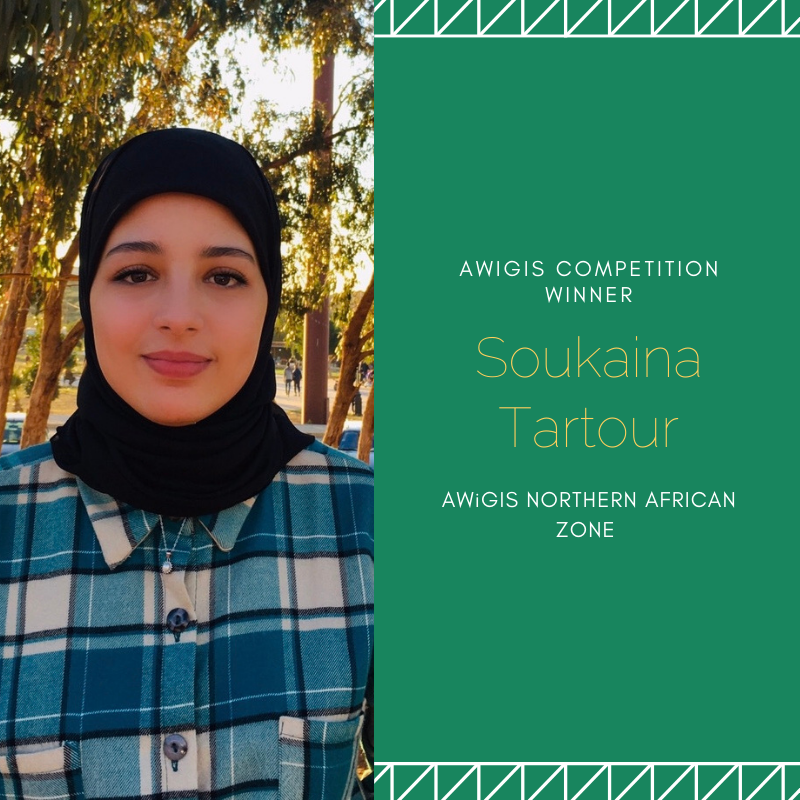 We hate spam as much as you. We will only mail you when we
have something important to say. 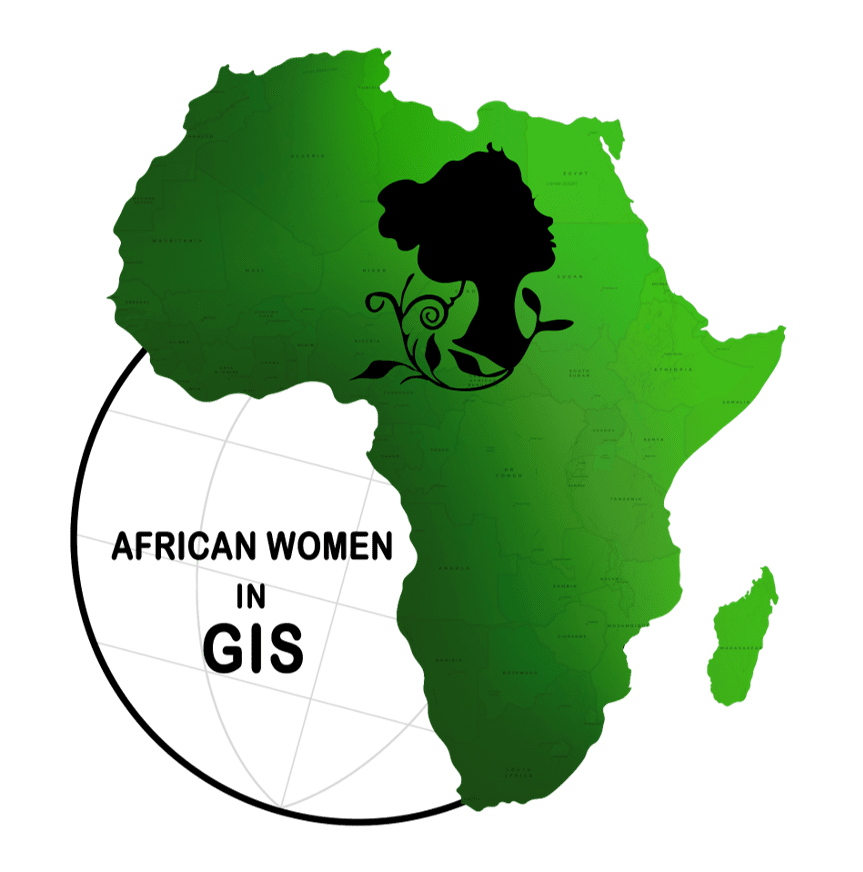 African Women in GIS is an online community made up of African women around the world who study, work, or are interested in the Geospatial industry.